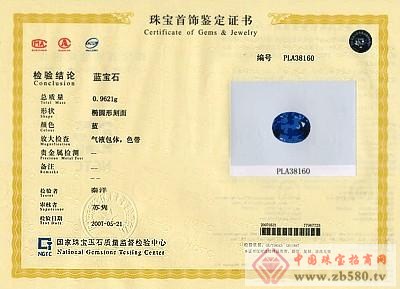 Last Wednesday, the reporter reported that Ms. Li bought synthetic gems at the jewellery fair in Madian. Dong Zhenqing, the appraiser of the China Federation of Industry and Commerce Jewelry Testing Center, sent a hotline to the newspaper saying that the identification certificates provided by illegal traders at the jewelry exhibition were fake and not issued by their center. Dong Zhenqing said that in the face of various fake jewelry identification certificates, they are also very helpless, and hope that the relevant departments can completely rectify and regulate the market order.

Dong Zhenqing is an old appraiser of the China Federation of Industry and Commerce's Jewelry Testing Center. He talked about him in the industry, and his name is very bright. Even many appraisers told reporters that Mr. Dong looked at things almost without eyesight. However, in the report of this newspaper last Wednesday, on the appraisal certificate of Ms. Liâ€™s purchase of fake gemstones, the appraiser wrote Dong Zhenqing, what is going on?

"I read the newspaper. The name of the appraiser in the photo was mosaiced, but I don't have to ask, the name must be me." Yesterday, the reporter contacted Teacher Dong. He told reporters that these certificates are fake certificates and are forged by unscrupulous traders. This situation lasted for at least one or two years. Not only the testing center, but the appraisers themselves were also infringed. Then Teacher Dong sent the real certificate to the reporter. The difference between the true and the false is obvious, such as the color and shape of the border pattern, the text content on the certificate, and so on.

In order to resist these fake certificates, the China Federation of Industry and Commerce Union Jewelry Testing Center also thought a lot of methods. For example, since September 1 last year, the center identification certificate has added a QR code, but some citizens said they did not know the news.

The official website on the certificate is also fake

Teacher Dong recalled that in the past one or two years, the China Federation of Industry and Commerce Union Jewelry Testing Center has repeatedly found that fake websites have appeared repeatedly, and the inquiries of these fake identification certificates have certainly been done on the fake websites.

"Until recently, fake websites still have movements. We don't know who to look for." Dong said that there is a fake website that is still awkward. The URL spelling and the real website are only two letters different. The website content is also very interesting. Like.

They found that the server of this website came from Donghai County, Lianyungang City, Jiangsu Province, and reported to the relevant departments, but the local industry and commerce department always said that it could not be found. "Now we have reflected the problem to the China Internet Illegal and Bad Information Reporting Center and the Beijing Public Security Bureau Network Alarm Center. There is still little progress."

Watch detection is even more unreliable

From the name of the name, the China Federation of Industry and Commerce Jewelry Testing Center can know that its function is to detect jewelry. Recently, there have been many famous watches that have flowed from Hong Kong to the Mainland. The test certificate reads â€œMotion: Swiss Movementâ€, and the inspection unit is actually a Chinese business. Union Jewelry Testing Center. The person who bought the watch found that the watch was fake. When he couldnâ€™t find the person who sold the watch, he called the phone to the testing center. Some of them also said nothing, and the staff at the center were very fond of it.

"We don't understand machinery. This is definitely not our test." Teacher Dong was suffering from a bitter stomach. He said that some people called and even thought that the center and the sellers were selling a sigh of relief. Two or three.

Next: How much is a red agate?